Trends and Data From 2015 for Extension Websites

Find this article at:
go.ncsu.edu/readext?387255
— Written By Mike Vysocka

It’s been another incredible year on the web for North Carolina Cooperative Extension. We launched a few new topic hubs (here’s our full list), bringing our total number of public facing Extension sites to 153. We also grew our MailChimp subscriber lists to over 3,200 email addresses and created a single page where our users can subscribe to receive our website news via email.

Our overall traffic was through the roof this year

We served approximately 5.8 million pages (up 23% from last year) to over 2 million different users this year and reached an all-time high for percentage of users coming from outside North Carolina at 72%.

Number of visitors (by week) since we launched the new websites in 2012. The increase is pretty clear.

We’ve also seen a dramatic increase in the number of folks who are reading our content on a mobile device. There’s no surprise here, but the growth has been rather impressive. Only 12% of our visitors consumed our content on mobile in 2012, and this year we peaked at 45%. 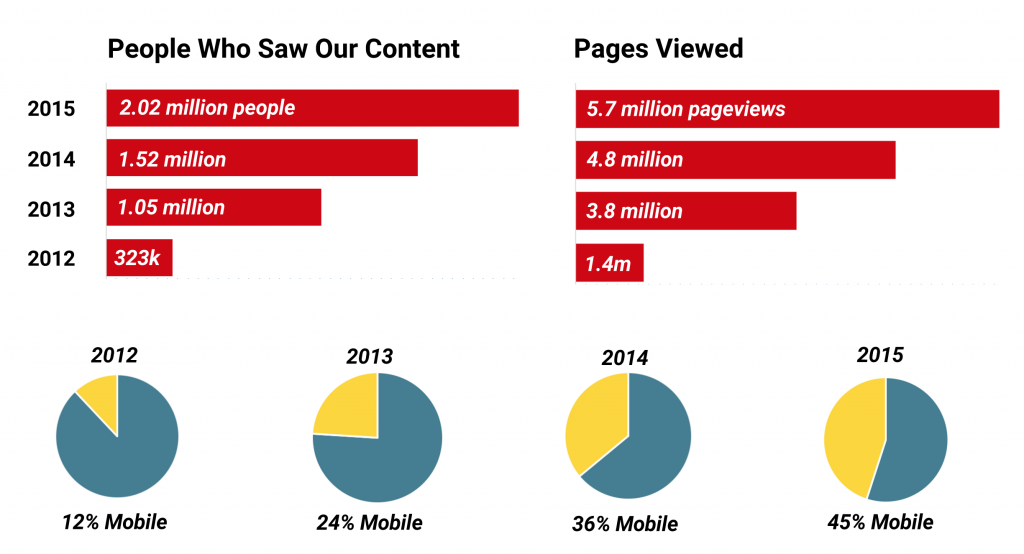 The content you’re creating is having a tremendous impact.

Facebook continues be our Social Media champion, but we just added support for two more platforms

User feedback has been overwhelmingly positive

Of the 45,000+ pieces of feedback that have come in from the ‘Was the information on this page helpful?‘ widget, only 15% said ‘No’ and only 1.5% were able to cite a reason that was constructive enough to be passed along to the author.

These are the most common themes amongst the small percentage of negative feedback that has come in:

Search: Not a whole changed

Overall, users were generally still after the same content when it came to search in 2015 as they were when we first launched our new site in 2012.

I hope everyone has a wonderful Holiday! If you have any specific questions about data for your site, don’t hesitate to ask! Email: ces_help@ncsu.edu